The seismic network recorded three volcano-tectonic earthquakes and two rockfalls this week. There are no SO2 flux measurements to report during this reporting period.

Here’s the rest of the Montserrat Volcano Observatory Weekly Report:

Partly sunny with a 40% chance of showers on the Emerald Isle today due to some remnant and shallow moisture from a tropical wave that has moved west of the region!

Weather tonight: Cloudy with a 60 % chance of showers!

WINDS: East-northeast today then shifting to the East tonight at 7 to 14 knots.

Remember, the weather is subject to change at a moment’s notice – Stay ahead! Events such as flash floods can occur with little warning if there’s prolonged rain, rain showers in the higher elevations and the soil already saturated.

Winds: Southerly and gentle to moderate; 5 to 12 knots during the day and in the evening Easterly @ 7 to 10 knots.

Access has now been restored to Isles Bay and residents can now travel to and from the north of the island. The Public Works Department has cleared the Isle Bay road and its drivable again. The Disaster Management Coordination Agency (DMCA) is urging residents and motorists to drive with extreme caution when crossing the Belham Valley River.

A beautiful overcast day today on the Emerald Isle, sun peaking through the clouds! A 20% chance of a brief passing shower! Weather tonight: Fair to partly cloudy skies with a 40% chance of brief passing overnight showers.

As of 10 am, TD 31 was located about 310 miles south-southeast of Kingston, Jamaica with maximum sustained winds of 35 mph moving west-southwest at 7 mph. Tropical Depression 31 is forecast to strengthen as it heads towards Nicaragua and Honduras late Sunday and Monday. The Meteorological Service of Jamaica says if current weather patterns continue to mirror the 2005 hurricane season, this year’s season could extend to January 2021. Speaking with Nationwide News, the Director at the Met Service, Evan Thompson noted that this year is the most active hurricane season on record. Photo Courtesy: Weather Channel

A few hours ago, at the Lyme in Brades, a young man had a sudden fall and began frothing at his mouth. His eyes rolled upward, his body shaking and then suddenly his entire body stiffened all at once among other symptoms associated with a seizure.

There were some young men there and they thought the gentleman was joking, so they laughed and ran away. I was at Marse Bob shop to get some nuts and while talking to the shop assistant there we both heard a loud noise as the man fell to the ground; it was a terrible fall. The young lady said to me the man was having a “fit” as we say colloquially. As an onlooker and a staff member at the Disaster Management Coordination Agency, I rushed to see if the gentleman was okay. I said to the young men there call the ambulance because this is serious and not a joke. They said someone had already called the ambulance. It was quite a dramatic and scary experience.

Miraculously, Private Rodriques in civilian clothing, some distance away saw the young man on the floor and shouted to another young man turn him on the side and keep him there until he reached the scene. I observed Officer Rodriques turn the gentleman on his side and administer care to him. At one point someone said this time he’s dead, as his eyes closed and body looks motionless. But, Private Rodriques never gave up on the gentleman, he kept the man on his side and tried to calm him, speaking softly with a firm and authoritative voice. I was getting concerned and scared, so I called the ambulance myself and was told the ambulance is on its way.

Today, I celebrate and salute our unsung hero, Private Jerome Rodriques who has been a private in the RMDF for the past five years and commend the rank and file of the force for a job well done. Onlooker and a staff member at the Disaster Management Coordination Agency

The Disaster Management Coordination Agency (DMCA) is urging residents to be cautious when travelling throughout the island as some areas are still prone to landslides and rockfalls as a result of soil saturation from two (2) days of prolonged rains. Although, it seems the rains have subsided at the moment, the possible rainfall total forecast for today is 1 to 3 inches. The DMCA is also warning residents of Isle Bay and other areas as well as sandminers not to attempt to cross the Belham Valley River as water is still flowing in the valley and rain showers in the higher elevations can trigger further lahars and mudflows in the Belham Valley River. Residents south of the Belham Valley River who are stranded particularly those in Isles Bay are asked to contact the DMCA on 491-7166 or 491-3076 if you have any urgent medical or humanitarian needs. Residents should not attempt to cross the Belham Valley as this can be extremely dangerous. Vehicles can be easily swept away or stall in flowing water. There are still few areas islandwide with rocks on the road hence, the Disaster Management Coordination Agency is appealing to motorists to please use extra caution when travelling and to be mindful of the Public Works Department crew clearing debris and rocks on roads. A flash flood watch is in effect for flash-flood prone areas of Montserrat until 5 o’clock this afternoon. Stay safe!

Cloudy with periods of rain or showers and a 30% chance of thunderstorms due to the presence of Tropical Disturbance AL98 and associated troughs. Possible rainfall total for the forecast period is 25 to 75 mm or 1 to 3 inches. A flash flood watch is in effect for Montserrat. 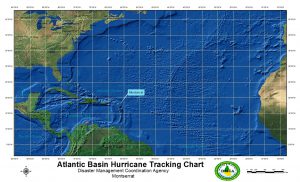