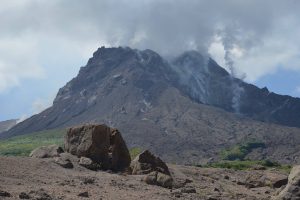 HERE'S THE REST OF THE MONTSERRAT VOLCANO OBSERVATORY'S WEEKLY REPORT FOR THE PERIOD JULY 21ST TO 28TH, 2017

The seismic network recorded one rockfall and 36 volcano-tectonic earthquakes this week. All 36 VTs occurred in a brief, but intense swarm that began at 06:41 (local time) on 27 July.

This is the strongest swarm to have occurred since March 2014.

There were no observable changes in fumarole activity, nor was there any ash venting, following this swarm.

Measurements of the SO2 flux were made using the helicopter on 26 July. A total of nine traverses beneath the plume were carried out, with an average SO2 flux of 355 tonnes per day.

TODAY’S LOCAL WEATHER FOR MONTSERRAT VALID UP TO 8 AM TOMORROW TUESDAY AUGUST 1ST, 2017

SYNOPSIS: A moderate to fresh trade wind flow generated by a ridge of high pressure will transport pockets of low-level moisture across the islands at times today and tonight.

WEATHER: Partly sunny skies today and fair to partly cloudy skies tonight with a moderate chance for some brief passing showers later in the morning going into the evening hours. 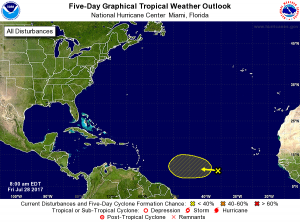 Across the Atlantic basin on this Friday morning, a tropical wave is located over the central tropical Atlantic Ocean. The associated cloudiness and showers have decreased since yesterday and environmental conditions have become less favorable for tropical cyclone formation as it moves slowly westward during the next several days. It has a low chance of becoming a tropical cyclone during the next five days.

SYNOPSIS: Lingering moisture and instability from the passage of a tropical wave are affecting the area. 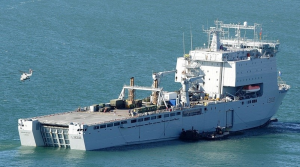 According to a Governor’s Office Press statement, the British Royal Fleet Auxiliary naval support ship RFA MOUNTS BAY will arrive in Montserrat on 31 July for a four-day visit during her deployment to the region as Atlantic Patrol Task North (APT (N)). This is a UK Governmental year-round commitment to the Overseas Territories and the wider region in support of Humanitarian Aid and Disaster Relief (HADR) and counter narcotics operations.

The release states that during MOUNTS BAY’s visit the Commanding Officer, Captain Chris Clarke, will call on H.E. the Governor and the Premier as well as visiting the DMCA and the Montserrat Volcano Observatory. A major part of the visit will focus on contingency planning between the island’s experts and the ship’s own teams on disaster management. This will involve mutual capability briefings and planning meetings. This will all culminate in a major exercise starting at Little Bay on Tuesday, August 1 which will test the ship’s ability to deploy its assets ashore and Montserrat’s ability to coordinate a land-based response.

The release went on say that MOUNTS BAY will also deliver an ex-UK Royal National Lifeboat Institute Rigid Inflatable Boat for use by Montserrat’s Search and Rescue Authorities. The boat is on temporary loan to Montserrat through a dual arrangement between the Governors’ Office and the UK’s Foreign & Commonwealths’ Office until the island’s substantive police vessel is delivered in December/ January.

In addition, the ship’s company will assist in several community projects as part of the exercise and will also host a Press Conference, tours of the ship as well as an official reception onboard. Their football team are looking forward to playing a match against a home team.

It confirms that MOUNTS BAY has a wide range of multi-purpose vehicles, boats, equipment and relief stores, including UK Department for International Development (DfID) stores, to support relief operations. Since arriving in the Caribbean in late June, the ship has exercised in Martinique, Grand Cayman, Jamaica, Tortola and Anguilla and is now preparing for their arrival in Montserrat.

The latest Royal Navy WILDCAT helicopter is embarked to conduct counter narcotics operations at sea and provide an advanced airborne asset for surveillance, stores delivery and search and rescue tasking if required. Whilst in Montserrat the helicopter will take part in a search and rescue exercise.

A DISTURBANCE IN THE ATLANTIC 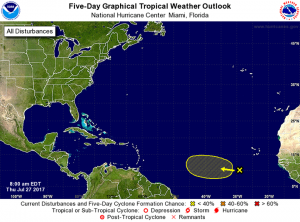 An area of disorganized cloudiness and showers extending from the Cabo Verde Islands southwestward across the far eastern tropical Atlantic. It's primarily associated with a tropical wave, and slow development is possible over the next several days while it moves westward or west-northwestward at 5 to 10 mph. It has a low chance of becoming a tropical cyclone during the next five days.

HERE'S THE REST OF TODAY'S LOCAL WEATHER FORECAST FOR MONTSERRAT VALID UP TO THURSDAY JULY 27TH, 2017

SYNOPSIS: Ridge of high pressure along with an airmass low on moisture will yield little shower activity across the Leeward Islands during the morning. However, a tropical wave bringing some instability and moisture to the region later this afternoon and tonight will increase the chance of showers across the islands. Also, a warm and light southeasterly windflow will keep the environment uncomfortably warm today.

TONIGHT: Cloudy with a high chance of showers and a moderate chance of thunderstorms. 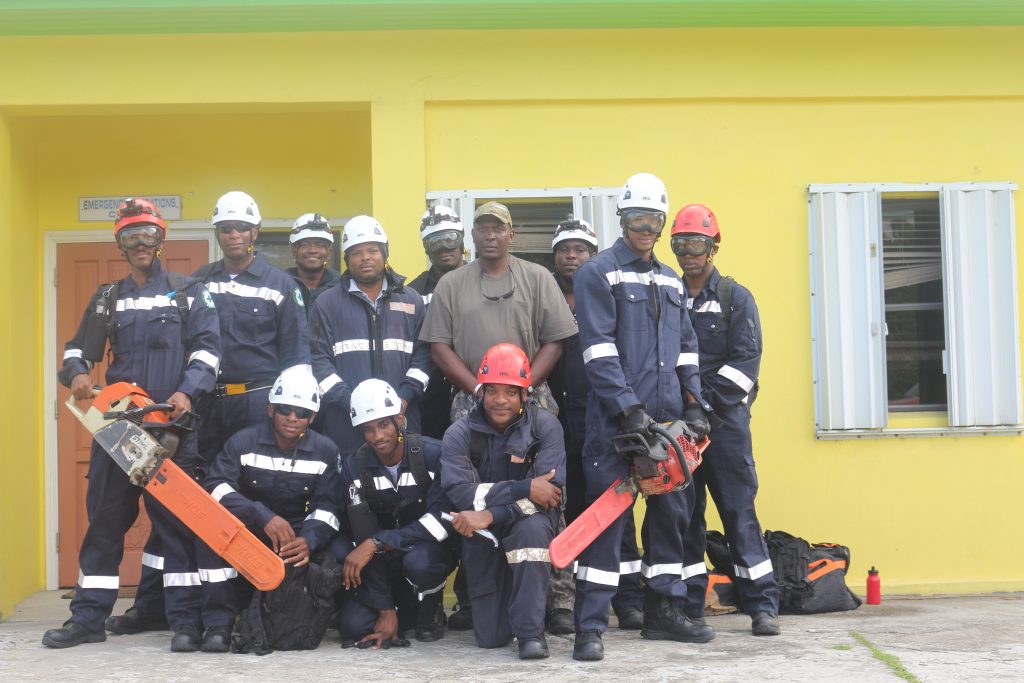 Efforts are underway here to revive the Montserrat Search and Rescue Team as part of the island’s 2017 Hurricane Preparedness and in the event of an emergency or other disasters.

This week, The Montserrat Fire and Rescue Services is spearheading a one week USAR (Urban Search and Rescue) refreshers training course in collaboration with the Disaster Management Coordination Agency (DMCA) at the Royal Montserrat Police Service conference room in Brades.

The training this week, is the first step in the process to have a well-trained and well-equipped Montserrat Search and Rescue Team, on hand, comprising of 30 selected individuals to respond to numerous incidents.

In the event a tropical storm or a hurricane does impact the island, the Montserrat Search and Rescue Team will provide search and rescue assistance, humanitarian operations and emergency medical care support.

Areas being covered include ropes, lines and knots, lifting and moving; searches, building and open field; chain saw and map and compass among day and night time exercises.

SYNOPSIS: A tropical wave is exiting the area, giving way to relatively dry and stable weather. Possible rainfall total for the forecast period is 0 to 3 mm (0 to 0.12 in).

WEATHER TODAY: Partly sunny with a 30 percent or a moderate chance of showers.

WEATHER TONIGHT: Partly cloudy with a 20 percent or a slight chance of showers.

SEAS: Slight to moderate with heights of less than 1.5 metres or less than 5 feet.

HERE'S THE REST OF TODAY'S LOCAL WEATHER FORECAST FOR MONTSERRAT VALID UP TO WEDNESDAY JULY 26TH, 2017

SYNOPSIS: The presence of a tropical wave will increase the chances for shower activity over and around the islands today and tonight.