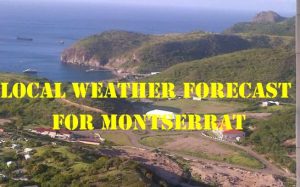 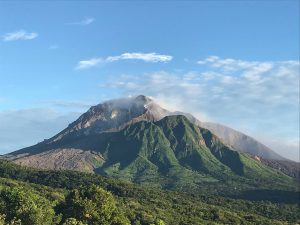 Activity at the Soufrière Hills Volcano remains low. The seismic network recorded no events this week.
SO2 flux measurements via traverse were not possible during the reporting period. Pyroclastic flows can occur at any time without warning on any side of the volcano, including Gages from where they can travel rapidly into Plymouth. Tracks across the Belham Valley can be destroyed or heavily modified by flash flooding or lahars, and caution should be exercised crossing the valley during and after rainfall. The Hazard Level is 1. There is no public access to Zone V, including Plymouth. Maritime Zones E and W are daytime transit only between sunrise and sunset (boats may sail through the zone but must not stop). Anyone who ignores these restrictions is liable to be prosecuted.

HERE'S THE REST OF THE LOCAL WEATHER FORECAST VALID UP TO 8 AM TUESDAY JUNE 25TH, 2019

SYNOPSIS: Remnants of moisture and weak instability associated with the passage of a tropical wave could trigger few showers across the area.

WEATHER TODAY: Partly cloudy with few cloudy periods and a 60 percent or moderate chance of showers.

WEATHER TONIGHT: Partly cloudy with a 20 percent or slight chance of showers.

SYNOPSIS: Notwithstanding the presence of a mid to upper trough over the area, a very dry low-level atmosphere associated with a surface to low-level ridge will keep rainfall activity minimal
WEATHER TODAY: Fair to partly cloudy and slightly hazy WEATHER TOMORROW: Partly sunny and slightly hazy WINDS: East with average speeds between 8 to 16 knots or 15 to 30 km/h. SEAS: 1.5 to 1.8 meters or 5 to 6 feet; Small craft operators should exercise caution against choppy seas. Sunrise Tomorrow: 5:37 pm. Sunset tomorrow: 6:44 am. TODAY'S TEMPS: HIGH: 30°C/ 86°F LOW: 25°C/77° F

SHOWERS, RAIN AND A SLIGHT CHANCE OF THUNDERSTORMS TODAY DUE TO THE PRESENCE OF A TROPICAL WAVE 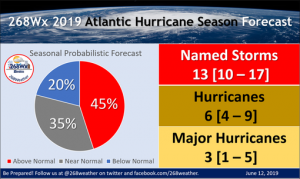 Meteorologist/Climatologist for the Antigua and Barbuda Meteorological Service Climate Section Dale Destin in his June updated forecast for the 2019 Atlantic Hurricane Season calls for an above normal activity (an active season) being most likely. The probability of this happening is virtually unchanged from his previous forecast – 45%. It also calls for an accumulated cyclone energy (ACE) index of 114 (up 1), 13 named storms (up 1), 6 hurricanes (down 1) and 3 major hurricanes (up 1). Another way of interpreting my forecast is that it is calling for an above to near normal season – 80% probability.
A typical season has 12 named storms, 6 hurricanes, and 3 major hurricanes. Major hurricanes have sustained wind speeds of at least 178 km/h or 111 miles per hour (e.g., Category 3 or higher), according to the Saffir Simpson Hurricane Wind Scale. According to other forecasts surveyed, the consensus is for an ACE of 114, 13 named storms, 7 hurricanes and 3 major hurricanes – above to near normal season, which is now almost identical to my forecast. However, regardless of the forecast, you should always prepare the same each season, as it only takes one hurricane to ruin your year and or life. The Atlantic hurricane season begins on June 1 and concludes November 30. The next update will be issued around July 10.

SYNOPSIS: The surface high pressure system is expected to be the main weather feature to affect conditions over the area. Shallow pockets of moisture moving over the island could trigger some brief and isolated showers.

WEATHER TODAY: Partly cloudy with a 40 percent or a moderate chance showers.

WEATHER TONIGHT: Partly cloudy with a 40 percent or a moderate chance of showers.