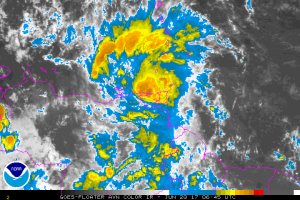 An unusually strong system for June will pass through the southern part of the Windward Islands with tropical storm conditions through Tuesday.

The system strengthened into Tropical Storm Bret on Monday afternoon. Since Bret formed prior to June 22, it has become the earliest named storm to form in this part of the Atlantic since official records were kept in 1851.

Because of the compact nature of the storm, adverse conditions are likely to hug the coast of Venezuela, while moving on a westward path through the southern part of the Windward Islands and a portion of the Leeward Antilles.

People on the islands from Trinidad and Tobago to Grenada, St. Vincent and the Grenadines, Barbados, St. Lucia, Margarita and Tortuga can expect showers and gusty thunderstorms through Tuesday.

Bathers and boaters should heed all advisories as seas and surf will be dangerous.

Rain is generally needed on these islands since they receive little rain on an annual basis. However, too much rain can fall too fast and lead to flash flooding and mudslides. Rainfall will average 2-4 inches with locally higher amounts possible.