DMCA CONTINUES TO MONITORS THE DISTURBANCE (LOWER YELLOW X) EAST OF US WHICH CONTINUES TO HEAD TOWARD THE ISLANDS OF THE EASTERN CARIBBEAN; IT’S NOW DOWN TO A 30% CHANCE OF FORMATION WITHIN 5 DAYS 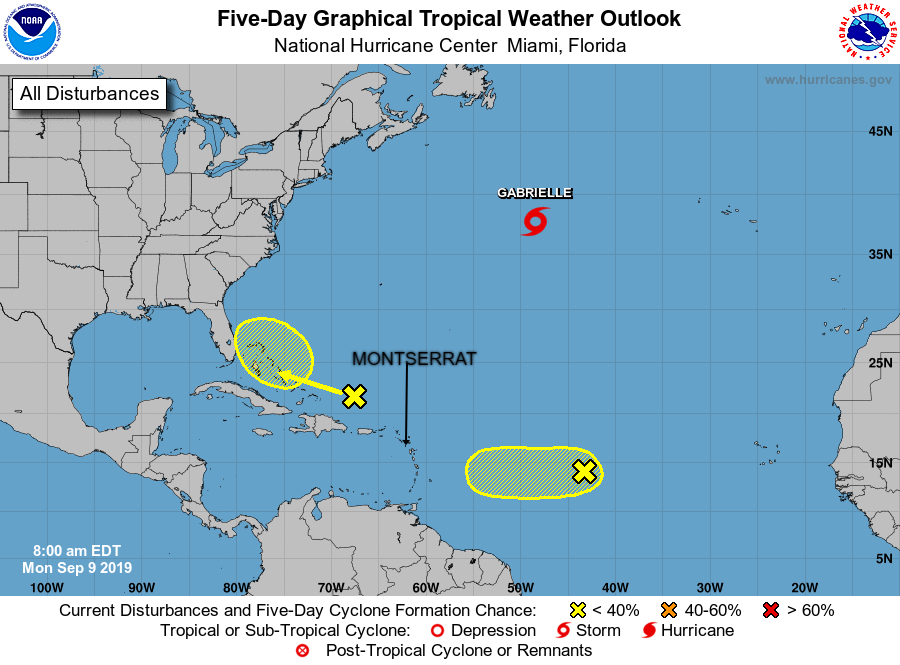 For the North Atlantic…The Caribbean Sea and the Gulf of Mexico:

1. A weak area of low pressure, associated with a tropical wave, continues to produce disorganized showers and thunderstorms about midway between the Cabo Verde Islands and the Windward Islands. Some slow development of this system is possible during the next two or three days before upper-level winds become unfavourable for tropical cyclone formation. This system is expected to move generally westward across the tropical Atlantic Ocean for the next
several days.
* Formation chance through 48 hours…low…20 percent.
* Formation chance through 5 days…low…30 percent.

2. Disorganized cloudiness and showers located a few hundred miles north and northeast of the Greater Antilles are associated with a surface trough interacting with an upper-level low. Little to no development of this system is expected during the next day or two while the system moves west-northwestward, north of the Greater Antilles. Environmental conditions could become a little more conducive for development when the disturbance moves near
The Bahamas and Florida late this week.
* Formation chance through 48 hours…low…near 0 percent.
* Formation chance through 5 days…low…20 percent.